10 Important Women Of The Viking Age And Their Historical Legacies

Women played an important part in the early medieval Scandinavian societies during the turbulent Viking period. Although they were not able to lawfully exert a considerable amount of political and administrative influence over the Norse colonies in such places as Iceland or the Faroe Islands, they still disposed of a high hierarchic status within these communities as well as in native Scandinavia.

They also had more rights than other European women of their time, rights which were guaranteed by the law. In addition, they are also remembered for being talented runemasters, skaldic poetesses, traders, explorers, or even Viking warriors (shieldmaidens).

Below is a list comprising 10 noteworthy historical female figures of Norse origin who lived during the Viking Age (listed in no particular order).

Thyra was the wife of King Gorm the Old of Denmark, the first historically recognized monarch of the Kingdom of Denmark, whose reign took place in the mid 10th century. She was also the mother of King Harald Bluetooth. Thyra, unlike her husband, was known as a person of tremendous prudence. Saxo Grammaticus, a Danish historian who lived during the High Middle Ages, claimed that queen consort Thyra was responsible for the construction of the Danevirke defensive network in the south of Jutland. 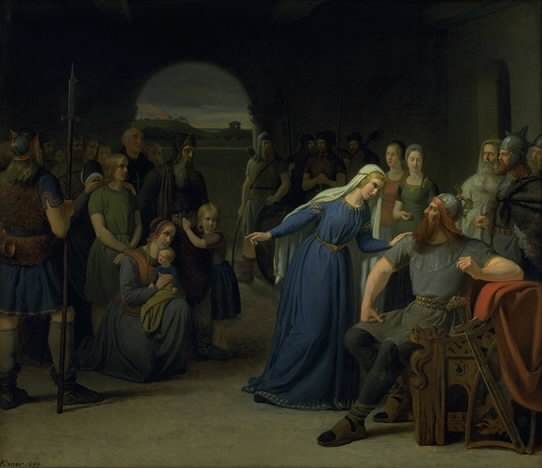 However, these earthen fortifications were subsequently dated much older than the Early Middle Ages and so Thyra’s role at the time was solely to extend them. The Jelling stones memorial from Jelling, Jutland is also dedicated to her. Additionally, an asteroid bears her name today.

Turið Torkilsdóttir was a respected Faroese noblewoman who was born in c. 960 in early medieval Norway. Her husband was Sigmundur Brestisson, one of the main characters of the Færeyinga saga, the story that relates the Christianisation process of the Faroe Islands and how the archipelago became part of the Kingdom of Norway. Sigmundur married Turið on his third visit to Norway, according to the same saga.

Their wedding took place at Haakon Sigurdarson’s (then the de facto leader of Norway) farm near modern day Trondheim (then known as Niðarós). After her husband’s death, she and her four sons lived on a farm on the island of Skúvoy for the rest of their lives.

Steinunn Refsdóttir was a late 10th century Icelandic skaldic poetess who was descended from a family of local ecclesiastical noblemen (known as ‘goðar’ in Icelandic). She composed poetry which is closely related to the Norse mythology and particularly associated with the god Thor.

While the medieval German chronicler Adam of Bremen claimed that King Sweyn Forkbeard was married to a Polish princess, Snorri Sturluson provided ambivalent accounts. According to the latter, King Sweyn might have been either married to her or to Gunhild of Wenden, a Slavic princess. Contemporary historians tend to regard her as a literary invention rather than an actual person, even though she might have been based on a historical character. Regardless of her existence/non-existence, she was described in the sagas as beautiful, proud, but nevertheless vengeful.

Jórunn was an early 10th century Norwegian skaldic poetess. Her nickname ‘skáldmær’ literally translates as ‘skaldic maiden’. She was the author of the longest skaldic poem ever written by a woman, specifically the Sendibítr (or ‘Bitting Message’ in translation). The poem related a feud between King Harald Fairhair of Norway and his son, King of Vestfold during the 9th century, Halfdan the Black. This poem was subsequently preserved in the works of Snorri Sturluson.

Hildr Hrólfsdóttir was a 9th century Norwegian noblewoman who was married to Rognvald Eysteinsson, the jarl (earl) of Møre (now county of Møre og Romsdal in Western Norway). Together they had three sons: Ívarr, Þórir, and Hrólfr. The latter will be eventually known as Count Rollon (Rollo) of Normandy. The other two sons and their descendants would eventually secure rulership over the Norse Earldom of the Orkneys and Shetlands.

Gunnborga was a 11th century Swedish runemaster who is responsible for the erection of the Hälsingland Rune Inscription 21 located in Jättendal, Nordanstig Municipality, Hälsingland, central Sweden. To date, she is the only historically confirmed female runemaster.

Gudrid Thorbjarnardóttir was an Icelandic female explorer born in circa 980 in western Iceland. She is mentioned in both Erik the Red saga and in the saga of the Greenlanders as part of the Norse crew led by Leif Erikson to Vinland (modern day Newfoundland, Canada). She was married to Thorfinn Karlsefni Þórðarson with whom had a son by the name Snorri Thorfinnsson, the first European born in North America.

Freydís Eiríksdóttir was the daughter of renowned Norse explorer Erik the Red and half-sister or full-sister to Leif Erikson (depending on several primary sources). She is mentioned in the two Vinland sagas as a strong, determined, and cunning woman who tries to fight against the odds of her society.

Aud the Deep-Minded was a Norwegian female settler of Iceland during the 9th century. She was the daughter of a hersir (the title attributed to a local military chieftain in charge of an army of one hundred men in the Viking period) by the name Ketill Flatnose from Ringerike, southern Norway. Her father would subsequently rose to the throne of the Kingdom of Mann and the Isles from c. 890 to 900.

She was married to Olaf the White, a Hiberno-Norse King of Dublin in the late 9th century. Together they had a son by the name Thorstein the Red who became a powerful warrior, managing to conquer most of northern Scotland after his father’s death in a battle that took place in Ireland.

Eventually though, Thorstein was betrayed by his people and killed in a battle. Upon hearing the news regarding her son’s death, Aud who lived in Caithness at the time, requested a knarr (a small Viking Age vessel) and voyaged across the North Atlantic Ocean with a crew of twenty men from the northeast of Scotland to the Orkneys, ultimately landing at Breiðafjörður in the west of Iceland.