10 Interesting Facts You Should Know About Leif Erikson

Leif Erikson is one of the most reputed Vikings (Norsemen) of all times. He is credited for having spotted the North American continent roughly 500 years before Columbus and as such regarded as the first European to have set foot on modern day Canada. Below you can find a list comprising 10 interesting facts you should know about him, ranging from history to popular culture.

Leif Erikson belonged to an extraordinary family of explorers. He was the second son of the reputed Erik the Red, a Norse navigator who discovered Greenland in circa 982 (although the Icelandic sagas might indicate Gunnbjörn Ulf-Krakuson as the legitimate discoverer of the large Arctic island) and grandson of Thorvald Ásvaldsson who was exiled from the Kingdom of Norway during King Haakon Haraldsson’s reign (most likely in 960) and left for Iceland.

He was also distantly related to Naddodd, a Faroese explorer who discovered Iceland by accident after being blown off-course from his voyage between early medieval Norway and the Faroe Islands. Furthermore, Erik’s older brother Thorvald has also led an expedition in North America but was killed by the Native Americans referred to as ‘Skrælings’ in the sagas. Such important is his family linage that one can easily conclude exploration was a family tradition.

9. The Norse discovery of North America

At some point during the late 10th century, an Icelandic merchant by the name Bjarni Herjólfsson was blown off-course during one of his voyages to Greenland and drifted along with his ship until he had spotted parts of the eastern coast of North America. However, he did not approach to land or to explore it further.

When he returned to Greenland, Bjarni spread the news about a mesmerising new land located to the west. After hearing his account, Leif Erikson along with a crew of 35 Norsemen sailed westward of Greenland in order to settle this new realm. Leif and his men had to stop on two lands before what will be their final destination. Leif called those lands ‘Helluland’ (most likely Baffin Island) and ‘Markland’ (most likely labrador).

After leaving Markland they approached present day Newfoundland which Leif named ‘Vinland‘. However, the Vinland Norse were quickly forced to withdrew because they were involved in a local war with the Skrælings (Old Norse name for Native Americans). 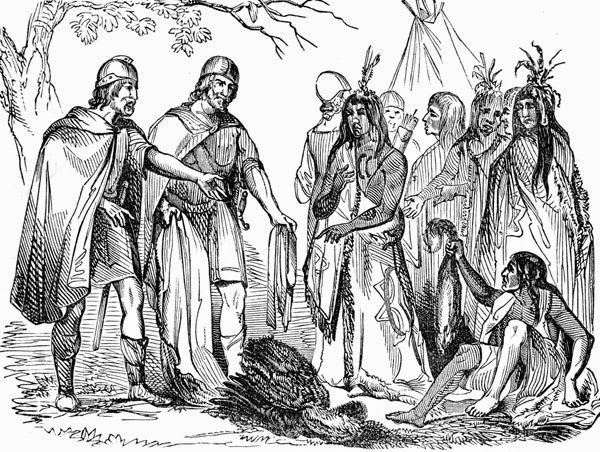 Artistic depiction of the Northmen trading with the Native Americans. Image source: www.blogspot.com

The name of Leif Erikson can be found in many variations in both medieval chronicles and on the world wide web. Such variations include Eriksson, Eirikson or Ericson. Nonetheless, it must be mentioned that his last name is a patronymic. Thus, his last name ‘Erikson’ actually means ‘son of Erik’ (i.e. Erik the Red).

When Leif eventually returned to Greenland, he came across a shipwrecked trading vessel. He invited the crew of the ship to sail with him and, in exchange, they gave him all of the boat’s cargo. For this, he has been henceforth known as Leif the Lucky.

Some of the greatest statues depicting Leif Erikson are those built in Iceland (one in Reykjavík and another one in Eiríksstaðir), the imposing monument near Minnesota State Capitol in Saint Paul as well as the ones at Port Seattle, Boston or Milwaukee.

Each year on October 9 Leif Erikson Day is observed nationwide in the United States. The celebration pays its homage to the Norse discovery of America and also focuses on the history and contributions of the Scandinavian Americans.

In an episode from the second season of the animated TV show SpongeBob SquarePants, the animation’s protagonist wears a fake red beard as well as a stereotypical horned helmet from the Viking Age.

Leif Erikson is featured on numerous postage stamps from around the world for his exploratory achievement. However, the most illustrative ones are those from the Nordic countries and the United States.

The Leif Erikson Awards are annually granted by the Exploration Museum based in the small town of Húsavík in northern Iceland to persons with outstanding performances with respect to exploration and navigation or to documentation of such tremendous achievements.

The awards comprise three distinct categories as follows: lifetime award for exploration, award for a young explorer (under the age of 35), and an additional award for a person or organization which contributed to the preservation of the history of exploration. These distinctions were awarded for the very first time in 2015.

Several noteworthy 19th century paintings represented Leif Ericson and the Norse discovery of North America (in part given the national Romantic movement in Norway which took place back then). Among the most well known painters who envisaged Leif and his crew in Vinland are Hans Dahl, Christian Krohg, Monro S. Orr or H.E. Marshall.