Commerce And Key Markets In Scandinavia During The Viking Era

Commerce in Scandinavia during the Viking Era is mostly known to have taken place between the major trading ports located around the North and Baltic seas. During the Viking Age, the most significant emporia situated along the coastlines of the previously mentioned bodies of water (or in their vicinity) were the following ones (approximate or precise contemporary coordinates given in parentheses):

From the list of the aforementioned settlements it must be mentioned that some had a defensive purpose as well, being built as strongholds and not solely as market places. Furthermore, some of them were mixed Scandinavian-Slavic markets (this means that they were populated at the same time by the Wends). It is equally important to highlight the fact that the town of Wolin in modern day Poland is very likely to have been the actual location of the famed Jomsborg (i.e. the citadel of the elite Jomsvikings during the early Middle Ages). 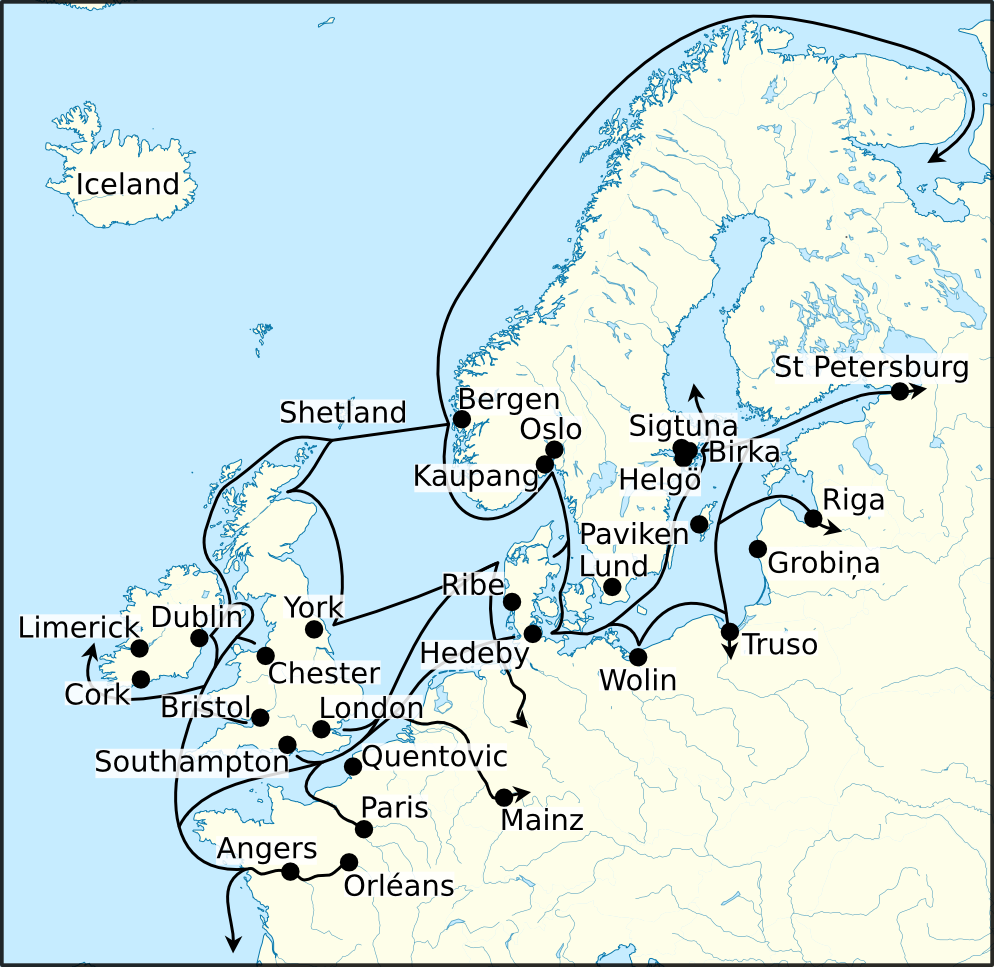 Detailed map depicting the trade routes of the Norsemen in Northwestern Europe during the Viking era. Image source: Wikimedia Commons

However, trade also took place between a wide variety of other undocumented trading outposts and harbours from the area between the North and Baltic seas. In fact, the Viking Age was primarily triggered by trade, rather than plunder, violence, or conquest.

Therefore, the trade network of the Norsemen comprised several key ports in native Scandinavia (where commerce mainly took place during the Viking era due to proximal logistic reasons). Yet, this network did not end there, as Norse merchants travelled to many places in continental Europe (and even beyond), arriving in Constantinople, Jerusalem, Baghdad, and even sailing on the Caspian Sea.

A peculiarity of trade within Viking Age settlements was that products and various goods were mostly charged in silver, rather than in gold. In this respect, the Norsemen developed a certain ‘bullion economy’, where silver overcame gold as a means of transaction.

The Norsemen mainly imported fine textiles, weapons, silver, and silk from the Frankish Empire, the Byzantine Empire, as well as from the Anglian kingdoms of Britain (i.e. Northumbria, Mercia, or Wessex). In turn, they exported, among others, skins, furs, amber, walrus ivory, or honey. Moreover, slavery represented an additional important part of the Viking Age trade. The slaves taken by the Norsemen overseas were also known as ‘thralls’.

The largest market places from Viking Age Scandinavia that handled all these goods were (in no particular order) the following ones:

It is also quite interesting to note that between 991 and 1018, the Anglo-Saxon kings of England paid Viking invaders 2.8 million troy oz in silver coins. This explains why today there are still more Anglo-Saxon silver coins in Denmark than in England.