There are five major Viking Age ring-shaped fortresses that have been discovered in Denmark thus far. In addition to the five Viking ring citadels from Denmark, there are others located in Scania, southern Sweden. There is another possible ring fortress in Rygge, Østfold, Norway, as well as another possible one in Helsingborg, Sweden (suggested in 2009).

These medieval architectural structures are alternatively known as ‘trelleborgs’ and are closely associated with either King Harald I of Denmark (also known as Harald Bluetooth) or with Sweyn Forkbeard. All of these fortifications were built during the Viking Age, sometime throughout the late 10th century and/or early 11th century, being used as either trading posts or military bases for the Norsemen’s subsequent conquest of London in 1013.

Map highlighting the locations of all Viking Age ring fortresses in both Denmark and southern Sweden (discovered as of 2014). Image source: Wikimedia Commons 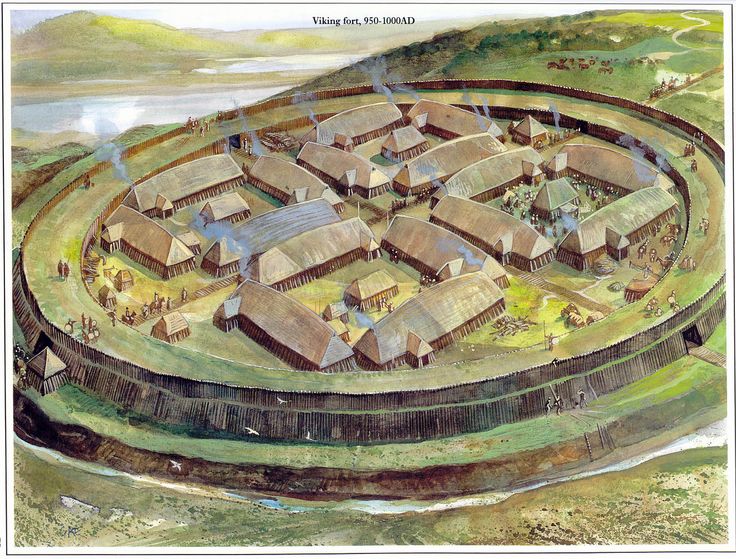 The Aggersborg fort is thought to have comprised about 48 houses within its walls, while Fyrkat and Trelleborg had 16 (although a different estimation for the latter puts the total number of houses at a maximum of 30). Their inner diameter is as follows: Aggersborg (240 metres), Borrering (122 metres), Fyrkat and Nonnebakken (120 metres each), and Trælleborg (136 metres).

With respect to their rampart width, Aggersborg has 11 metres, Borrering 10 to 11 metres, Fyrkat 13 metres, and Trelleborg 19 metres (the largest rampart width of them all).

All ring fortresses have a common circular shape, as well as gates to east, west, north and south. Their design is rather unique by the standards of other fortifications built during the early Middle Ages. Furthermore, all trelleborgs are actually planned to be submited to UNESCO as World Heritage Sites, both by Denmark and by Sweden.

Below you can watch a 21 minute documentary on the Viking ring fortress of Trælleborg in Danish (click for English subtitles):

Additionally, you can also take a virtual tour of all Viking ring citadels in Denmark by watching this Google Maps close-up tracking on youtube: Documentation sources and external links:
Liked it? Take a second to support Victor Rouă on Patreon!