Europe has always been a melting pot of a wide range of diverse and unique civilisations, cultures, and languages. Genetic studies clearly reveal those things and showcase the formation of the European nations as we know them today. The peoples of these nations are formed themselves from a mixture of other ethnic groups which once inhabited a certain territory and afterwards left a trace on a country’s history (be it a cultural one, a linguistic one or even the genetic one we are actually speaking about).

To better understand the history of all European peoples and their culture, one must undoubtedly take a closer look at the very grain of their origins and so to analyse the process of ethnogenesis. In terms of genetics, a nation is characterised by two types of haplogroups: Y-chromosomal (stemming from the paternal side) and the mtDNA (mithocondrial DNA stemming from the maternal side).

Following the migration of mankind from Prehistoric times onwards, here’s a list with the Y-DNA haplogroup types that went on to develop and disperse in both Asia and Europe on through the time’s passing:

Source for the classification and origins of the Y-DNA haplogroups above: eupedia.com

Below are a series of maps which highlight the distribution of haplogroups in modern European nations. Firstly, here are the Y-DNA maps: 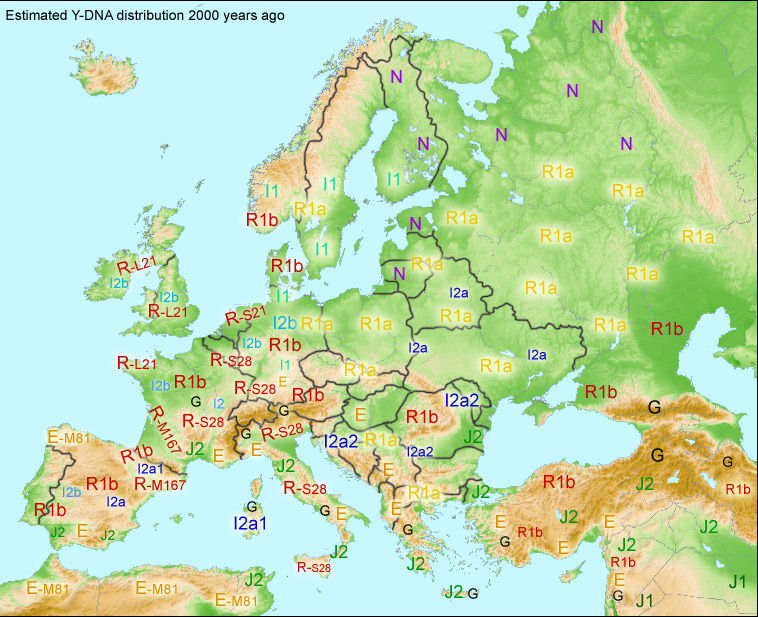 Recently, a group of experts from Oxford University and University College in London published an interactive genetic map where you can discover the admixture of the world’s populations during the last 4,000 years.

You can also watch the following momondo video on genetic tests on Youtube:

21 Responses to Genetic Maps Of Europe