A Brief History Of The Goths And Their Kingdoms

The Goths were an Eastern Germanic tribe which might have quite likely originated on the island of Gotland (from present-day Götaland, southern Sweden) in the Baltic Sea. They spoke the Gothic language, an extinct East Germanic language that mostly faded away by the 9th century AD. They were referred to as ‘Gutar/Gotar’ in Old Norse (highlighting their possible Swedish origin) or as ‘Gothi’ in Latin texts.

They are known to have later on migrated from Northern Europe to Central, Western and Southeastern Europe during the Migration Period (which commenced in late Antiquity and unfolded throughout much of the early Middle Ages).

The Goths were divided during this tumultuous period of time into two major branches, namely the Visigoths (also known as the ‘West Goths’, who settled much of modern day Romania during the 2nd century AD), and the Ostrogoths (also known as the ‘East Goths’, who settled far eastward on the Black Sea coast in modern day Ukraine). 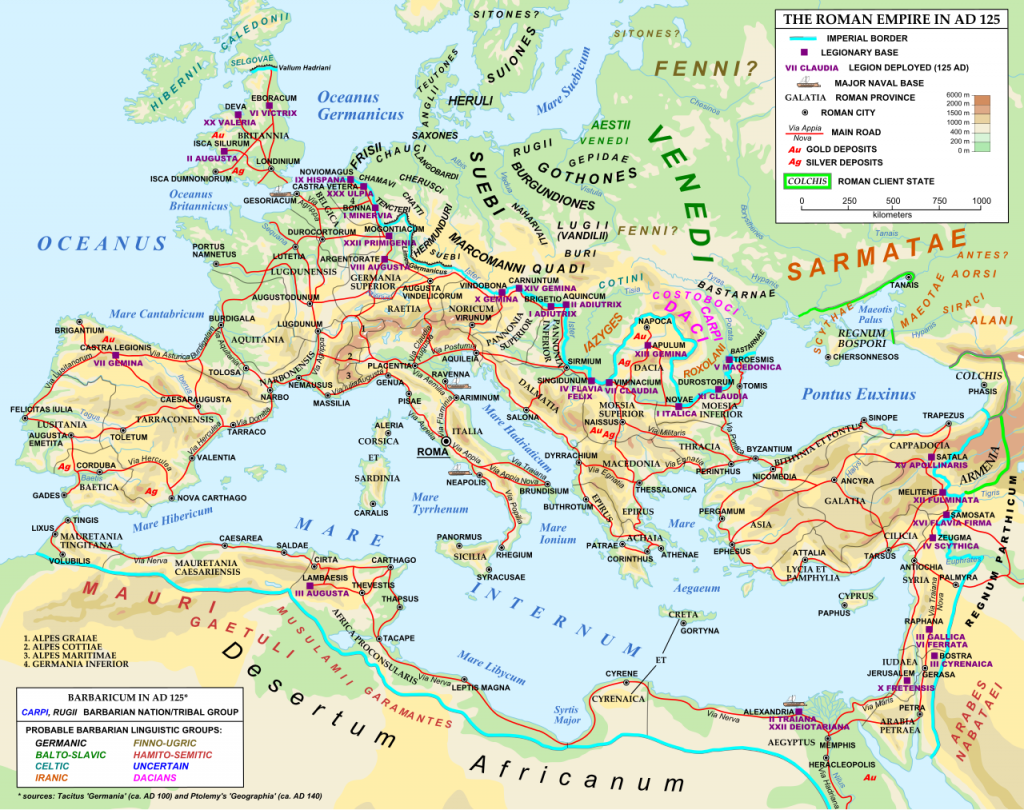 Detailed map of Europe and the Roman Empire in 125 AD. The denominations ‘Gothones’ and ‘Gepidae’ on the map refer to the Goths in present-day northeastern Poland. Image source: www.commons.wikimedia.org

They were known to the Romans as early as the 1st century AD and subsequently left Eastern Europe during the invasions of the Huns. Thus, in circa 376 AD the Visigoths were driven from modern day Romania by the Huns (who originated in Central Asia) and had no alternative but to move southward across the course of the Danube.

Then, they engaged in a series of skirmishes with the Roman Empire, eventually managing to defeat a powerful Roman legion in Constantinople as well as sacking Rome at the round of the 5th century AD under their king Alaric I. After sacking Rome, the Goths migrated into Gaul, where they were given land by the Romans in southwest. From southwestern Gaul, they subsequently managed to secure rulership over much of the Iberian peninsula.

The Ostrogoths freed themselves from the rule of the Huns and entered the Apennine peninsula during the 5th century. Under King Theodoric the Great, the Goths secured their conquest of much of present-day Italy during the late part of the 5th century.

Nonetheless, the kingdom of Theodoric the Great did not last long, as during the early 6th century the Byzantines sought to reconquer the newly acquired territorial possessions of the Goths. So it was that in 552 the Ostrogoths were defeated by the Byzantines and were ultimately driven out of the Italian peninsula.

The fewer Ostrogoths who resided in the north of modern day Italy were subsequently assimilated by the Lombards during the remainder of the 6th century. However, the Kingdom of the Visigoths managed to exist until the beginning of the 8th century, in stark contrast to that of the Ostrogoths.

In a nutshell, the Goths are reputed for being the first migratory people to sack Rome, thereby triggering the fall of Rome and thus marking the transition between late Antiquity and the early Middle Ages. Nonetheless, given the fact that they respected and admired Roman culture (ironically enough, after subduing the Roman Empire), they did not seem to influence the early stages of development of the modern Romance languages (i.e. Spanish, Portuguese, Italian, French, or Romanian).