Hierarchy In The Viking Age: The Social Classes Of The Norsemen

Below you can read a brief analysis of the Norse hierarchy during the Viking Age. Additionally, you can also get some insight with respect to the social classes that the Norse society consisted of.

Society in the Viking Age was far more complex than most people assume, given the vast majority of the myths and misconceptions surrounding the Norsemen that have been (wrongly) perpetuated throughout the passing of time. Before we get started on the social classes of the Norsemen, we must clarify a few misconceptions regarding them. For a detailed article on the etymology and the correct usage of the term ‘Viking’ please click on this link. Furthermore, for a detailed article on the top 10 most common misconceptions about the Norsemen please click on this link.

In early Viking Age Scandinavia, the territorial extent of the contemporary kingdoms of Denmark, Norway, and Sweden was divided into many small earldoms, which were each in turn ruled by a local petty king known as ‘jarl’ (also anglicized as ‘earl’). It was only during the end or after the end of the eventful Viking Age that the Scandinavian countries (as we know them today) had been each successfully unified under a powerful monarch.

However, even in these earldoms the Norsemen had a well organized society, which was based under the rule of law as well as on a strict hierarchy. In point of fact, it is quite necessary to further clarify that the Norsemen did obey to authority and respected basic sets of laws by highlighting the very word ‘law’ in English, which is of Old Norse origin (derived from ‘lag’ (sg.)/’lagu’ (pl.) initially meaning stratum, layer). Moreover, the term ‘by-law’, used in English for local laws, is also of Old Norse origin, since the word ‘by’ (pronounced ‘bu’) meant ‘town’ in the language of the Norsemen.

There was, nonetheless, no law that stipulated the fact that Norsemen could not raid overseas, since it was absolutely illegal to go a Viking in the areas where rules and laws were obeyed by an ethnic Norse majority. (i.e. in early medieval Scandinavia, Iceland, and the Faroes).

As such, to understand how the society of the Norsemen was shaped, we need to map their voyages around the medieval world known to them between the 8th and 11th centuries. Below you can see a detailed map depicting their voyages in Europe and North America during the renowned Viking Age: 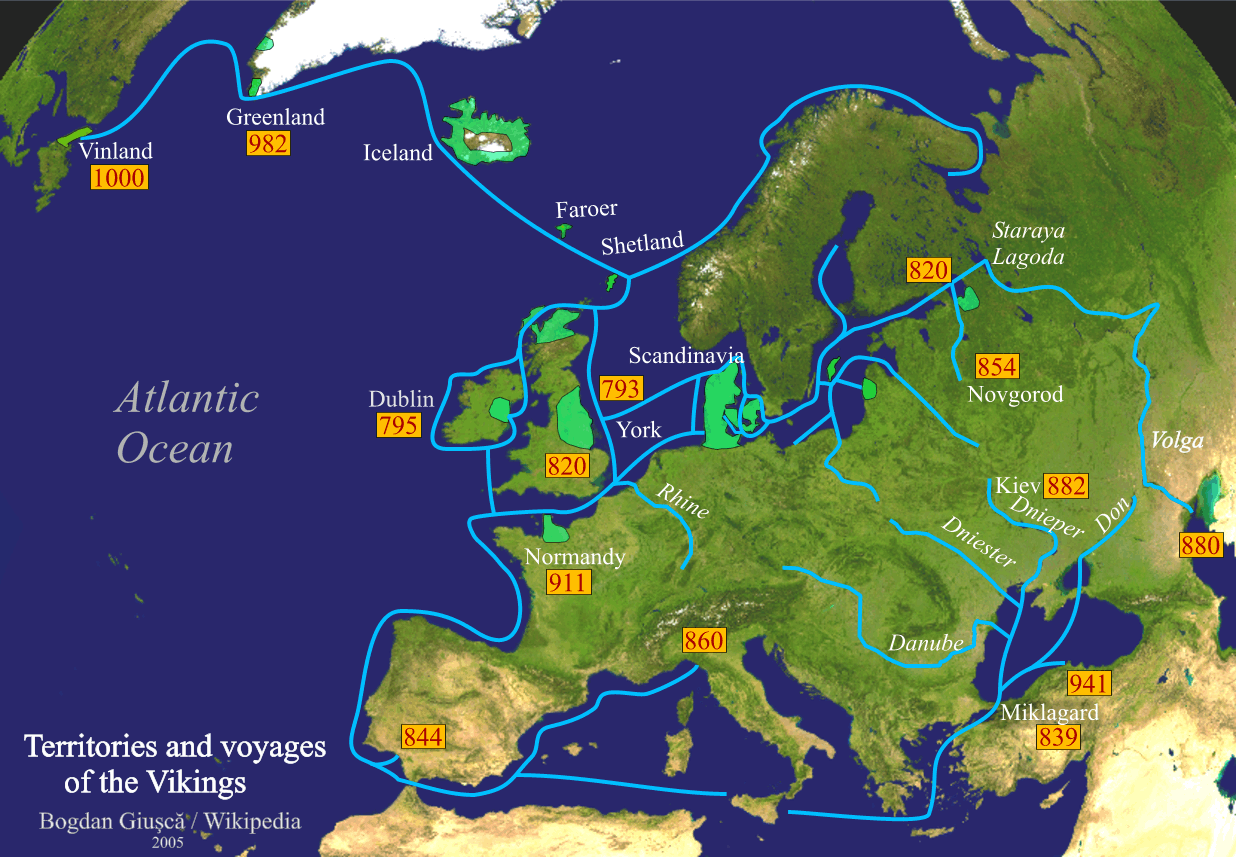 Detailed map of trade routes and territorial possessions of the Norsemen during the Viking Age. Map designed by Bogdan Giușcă for Wikipedia in 2005. Image source: Wikimedia Commons

There were four main social classes in most of the Viking Age world which can be identified as follows: 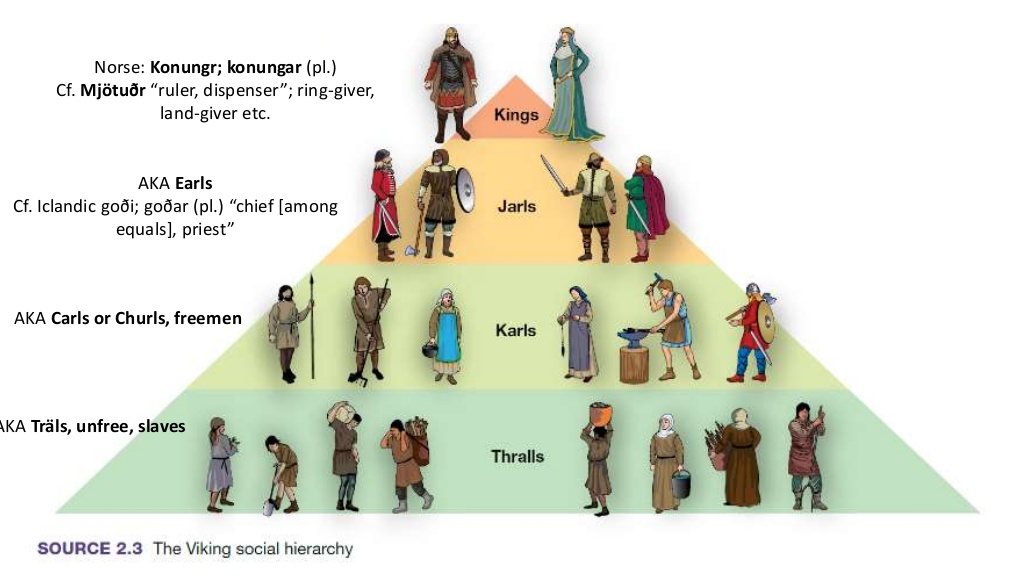 Very much unlike the unified Scandinavian kingdoms that developed during the end of or in the wake of the Viking Age, Iceland and the Faroes were rather special cases in terms of social hierarchy. The early medieval Icelandic and Faroese societies were very democratic, being in several noteworthy regards different from that of the conservatory political systems that were implemented at the time in native Scandinavia.

In both of these remote territories, the Norse society developed in a thoroughly democratic way, ruled by the ‘þing’ (‘thing’, meaning ‘assembly’ or ‘parliament’ in Old Norse) which was a public meeting that discussed laws and legal procedures that should be applied for the sake of the community.

Created for the very first time in 930, the ‘Alþing(i)’ (‘Althing’) was the parliament of all Icelanders which was held once in two years during the summer at the ‘Þingvellir’ (‘Thingvellir’), meaning the assembly location which took place in the meadows situated about 40 kilometres north of the capital city of Reykjavík. In the early medieval Faroese society, the ‘Løgting’ (‘Lœgthing’) had the same attributions as its Icelandic counterpart. Additionally, both parliaments are still in use today.

So it is that the early medieval Icelandic and Faroese societies looked under the following hierarchical order:

An interesting fact is that a similar parliamentary institution was created by the Norsemen in the Isle of Man. This institution was called Tynwald, also existent to these days. They had also introduced land divisions in Mann which are still in use. Local government in this crown dependency of the United Kingdom is based partly on 17 parish districts.

Another interesting aspect is that the Icelandic Alþingi, alongside the Faroese Løgting and the Manx Tynwald, are the oldest parliamentary institutions still in use today. The Icelandic Alþingi was briefly discontinued from activity between 1799 and 1844.

The Hierarchy Of The Norse Military System

The Norse hierarchic military system mainly revolved around the Hersir who was initially the title given for the commander of the men in the service of the local earl. The Hersirs were also aspiring for more land and, in many cases, they supported their monarchs in power centralisation campaigns.

Throughout the Viking Age, the title of Hersir was eventually given to someone who was in charge of organising Viking raids overseas. Starting in the 10th century Hersir’s role diminished, being replaced by local royal representatives appointed by the national monarch.

The Housecarls were men in the service of the nobility, hired as personal bodyguards in charge of protection and security. In Anglo-Saxon society a similar private institution existed as well and in both cases the word for housecarl initially meant ‘free man’.

The Overlooked (Yet Significant) Role Of Women Within The Norse Society

Quite many people tend to overlook the important part that women played in the Norse society, in part given the misinterpretation of several archaeological findings, but mainly because of imposing contemporary standards for the past, where men were highly ranked in social terms. This is not only misleading, but also utterly erroneous.

Women were not solely in charge of the households when their husbands went a Viking overseas. While indeed they fared exceptionally at providing everything essential for the well-being of the children and taking care of the resources of the family, women also possessed political and administrative influence and knowledge, but could not exert political actions in the assemblies or act as judges. 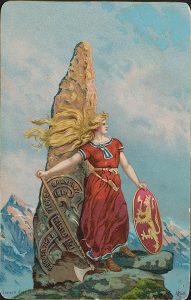 Women also weaved the sails of the reputed Viking Age longships, worked hard on the textiles in order to build them, and might have even gone a Viking with their husbands as shieldmaidens.

While the sagas tend not to be regarded as trustworthy historical documents by contemporary historians, other written accounts describing women who took part on the battlefield along with men are to be found in the works of Saxo Grammaticus and John Skylitzes.

Saxo Grammaticus (i.e. Saxo the Grammarist or Saxo the Learned), wrote in the ‘Gesta Danorum’ (i.e. literally the ‘Deeds of the Danes’ or the ‘Danish History Book’ which comprises nine chapters) the fact that women participated and supported the side of the Danes at the legendary battle of Brávellir (which took place in the mid 8th century near Brávik, East Gothland, contemporary southern Sweden), between Sigurd Hring, king of the Swedes and the Geats, and Harald Wartooth (not to be confused with Harald Bluetooth), king of the Danes and of the East Geats.

John Skylitzes, an 11th century Greek historian, noted that along with the Varangians (i.e. Swedish Vikings; not be mistaken for the elite warrior Varangian Guard of the Byzantine Emperor) who were defeated by the Byzantines at the Siege of Dorostolon in 971, there were also fallen armed female warriors after the end of the battle.

As shieldmaidens, Norse women are most prominently described in ‘Hervarar saga ok Heiðreks’ (‘The tale of Hervör and Heidrek’), ‘Vǫlsunga saga’ (‘The tale of the Völsungs’), and briefly in ‘Grœnlendinga saga’ (‘The Saga of the Greenlanders’), when the half-sister of Leif Eriksson by the name Freydís Eiríksdóttir took up a sword and scared off the invading Skrælings (i.e. Old Norse name for Native Americans of Newfoundland).

It is equally important to mention that women are also depicted in the Norse mythology, ranging from mesmerising goddesses to the brave valkyries. Renowned Norse women during the Viking Age include Aud the Deep Minded, Guðrún Ósvífursdóttir, or Sigrid the Haughty.

6 Responses to Hierarchy In The Viking Age: The Social Classes Of The Norsemen