During the late 8th century, the Norsemen commenced to set sail from Britain to Ireland and starting from the mid 9th century they built significant settlements which will later expand into present-day Dublin, Limerick, or Cork.

At first, their incursions into the British Isles consisted of raiding and plundering Catholic monasteries and transporting the loot back to native Scandinavia. They would also take slaves from among the indigenous Gaelic-speaking population. It seems that the Viking raiders who pillaged the eastern coastline of Ireland were initially of Norwegian descent. Subsequently, they were followed by other organized groups of Danish Vikings.

Along with the passing of time, some of the Norwegian Vikings who attacked the Catholic abbeys decided to settle down in Ireland and they eventually constructed settlements in the areas of contemporary Dublin (Dyflin), Limerick (Hlymrekr), Cork, Wexford, Waterford (Veðrafjǫrðr), Carlingford, Strangford, Lough Foyle, Annagassan, Arklow, Youghal, and Lough Ree. 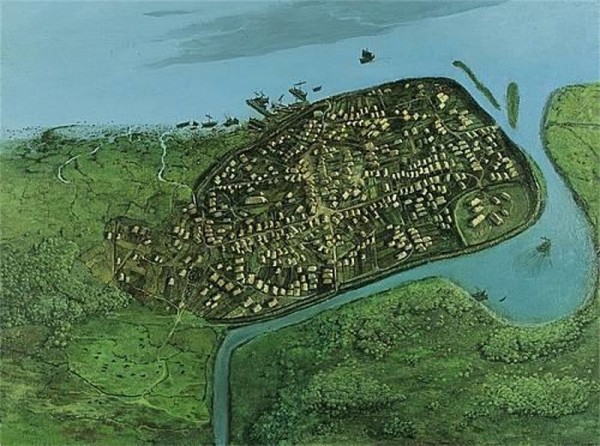 As the 9th century progressed, the Norwegian Vikings (known in Irish as ‘Fingall’) were followed by the Danish Vikings (known as ‘Dubhgall’) and thanks to the navigational technology of their dragon carved longships — known as ‘drakkars’ — they sailed quickly and easily through the channels and rivers of Ireland after they crossed the Irish sea. Consequently, The Norsemen established an early settlement of Dublin in 841, the one in Cork in ca. 846, and Waterford in 850. The latter was re-founded by the Norsemen at the round of the 10th century.

Since the establishment of their first settlements on Irish soil up to the early 11th century, the Norsemen gradually seized power in Ireland and became quite influent to the point where the natives themselves would forge military alliances with them in order to compete for the hegemonic power over the control of the whole island.

So it was that from the 9th to the 11th century, early medieval Ireland had been marked by relentless skirmishes between various Irish-Norse factions that would battle each other and control sparse portions of the petty kingdoms scattered all along the island for a brief period of time.

As the 10th century came to an end, the Vikings were reduced to a minor power in Ireland, being ultimately driven away in large numbers after the Battle of Clontarf, which took place in 1014 near what is now Dublin. The remaining Norse settlers assimilated in the Irish culture and continued to be merchants, seamen, and fishermen.

Below you can watch a short documentary film on the Norse presence in Ireland made by AppleBox Media for Mary Immaculate College in Limerick.