A Brief History Of The Vikings In The Faroe Islands

The Norse colonisation of the Faroe Islands is documented in the ‘Færeyinga Saga‘ (literally translated as the saga of the Faroese people; also known as ‘The Saga of Thrond of Gate’), an Icelandic saga written in the early 13th century.

Unfortunately, the medieval manuscript was lost in time but several passages from it were written down in other Icelandic medieval manuscripts, specifically in ‘Óláfs saga Tryggvasonar en mesta’ (a compilation of passages from various sagas dating from the 14th century; it mainly recounts the Christianisation of King Olaf Tryggvason, King of Norway from 995 to 1000) and ‘Flateyjarbók’ (or ‘The Book of the Flat Island’ in translation; it revolves around the history of the Norse kings in a similar manner as Snorri Sturluson’s ‘Heimskringla’ does).

According to recent archaeological studies and also to the written accounts of an Irish monk by the name Dicuil (which date from the Dark Ages), Irish hermit monks inhabited the Faroes long before the arrival of the Norsemen, as it was the case of Iceland.

A theory has it that these hermit monks were likely part of a Hiberno-Scottish mission sent northward of Ireland and Scotland in order to explore ‘the islands in the ocean north of Britain’ (according to the writings of Dicuil). A competing theory has it that they likely fled from the British Isles because of the incursions of the Norse.

Whatever the cause of the Irish hermit monks’ arrival in both the Faroes and Iceland may be, one thing is for certain regarding the Norse settlement in the Faroese archipelago, namely the fact that the name of the first Scandinavian settler was Grímur Kamban. His name is mentioned in both the ‘Saga of Olaf Tryggvason’ and in ‘Flateyjarbók’ as the Norse discoverer of the Faroe Islands. Nonetheless, the sources are contradictory to the year of Kamban’s departure from Norway.

The Icelandic chronicle ‘Flateyjarbók’ posits that Kamban’s emigration from Norway occurred during King Harald Hårfagre’s reign (known in English as Harald Fairhair), which took place between 872 to 930 CE.

On the other hand, ‘The Saga of Olaf Tryggvason’ recounts that he settled the Faroes long before the reign of Harald Fairhair. It also indicates that the Norse were driven from Norway to the Faroe Islands because of chaotic domestic rule. However, there is a significant error in the saga, because Harald Fairhair’s reign took place in the late 9th century, while Kamban is thought to have reached the Faroes around 825.

Another interesting aspect related to the story of the first Norse settler of the Faroes is that, as paradoxical as it may seem for some, Kamban, his surname, is a Gaelic name in origin. It is usually agreed though that in about 825 Kamban settled the Faroes at Funningur (translated as ‘the find’), nowadays a village located on the western coastline of the Eysturoy island. 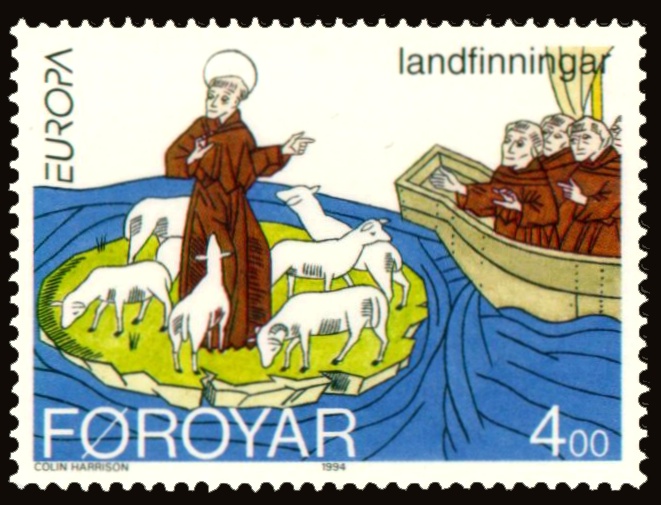 In fact, it is known that both the Faroe Islands and Iceland were inhabited by the Norse alongside their Celtic thralls from the British Isles (most notably from modern Ireland and Scotland), and to these days the genetic origins of the Icelanders and of the Faroese are of mixed Norse-Gaelic descent.

According to the writings of a Catholic order of Irish monks known as the ‘Papar’, the Irish hermit monks left the Faroe Islands because of Viking raids. It should mentioned however that the Norsemen didn’t raid the Catholic abbeys from the British Isles out of a cruel or barbarian instinct (or because of religious reasons). It was mainly wealth in which they were interested.

Furthermore, the explanations behind the Norse expansion towards new lands in the west and north (as it was evidently the case of the Faroe Islands) can be identified as follows:

There are also many myths concerning the Norse culture and the Vikings in general, but most of them can trace their origin in the work of several Romantic artists of the 19th century. One of these misconceptions (probably the most erroneous one) is that the Vikings represented a unified nation and that the term ‘Viking’ denotes a people.

These are false statements, given the fact that the term ‘Viking’ referred to a young aristocrat in the Norse culture who was trying to make a name for himself or herself (yes, women could have also gone a Viking, as they say) and early medieval Scandinavia was divided in small earldoms, each ruled by a local jarl (earl).

Therefore, the Vikings were an important part of the early medieval Scandinavian culture and society, but many other Norsemen were farmers, fishermen, blacksmiths, etc. Some of the Vikings were also poets, pirates and skilled traders, in addition to being warriors.

Another tremendous misconception about the Norsemen is related to the horned or winged helmets. The Norsemen didn’t wear helmets with wings or horns attached to them on the battlefield. If anything, they used this sort of headgear for ceremonial purposes (as it was the case of the Viksø helmets used in the Bronze Age on Zealand, Denmark), but it is quite unclear if they did wear them during rituals as well.

Concerning the subsequent settlement of the Faroe Islands by the Norse, an important source of information is represented by a farm located in the little village of Kvívík, situated on the island of Streymoy, the largest and most populated island of the archipelago.

A Viking Age longhouse was also excavated in the proximity of the farm, substantially providing details about the Norse lifestyle during the early Middle Ages in the Faroes. The series of excavations at Kvívík proved the validity of the Icelandic sagas, which some consider rather inaccurate or fictional. At Toftanes on Eysturoy (the second largest and most populated island of the archipelago), another longhouse dating to the Viking Age was unearthed with intact walls. It is a turf house made of stone and earth.