The History Of The Vikings In Vinland And North America

If until now you thought that the North American continent was initially discovered by Christopher Columbus in 1492 along with his crew and three ships (the carrack Santa Maria as well as the caravels Pinta and Santa Clara), then you have been misled to acknowledge one of history’s greatest confusions. Putting aside the fact that Christopher Columbus didn’t actually want to discover the New World but rather to seek a faster and easier way to reach India, America was spotted several centuries before by other Europeans, namely the Norsemen (Vikings).

The Norsemen who set foot on American soil at the round of the 11th century were led by Leif Erikson (also know as Leif the Lucky), the son of another reputed Viking explorer by the name Erik the Red, who discovered Greenland after he was exiled from Iceland for murder.

According to the legend, Leif Erikson heard the account of an Icelandic merchant who told him about a land of forests and lush meadows situated westward of Greenland. Having been informed about the existence of such a vast space worth colonising and farming, Leif Erikson gathered his men and set sail to reach for this mesmerising land the Icelandic merchant told him about. 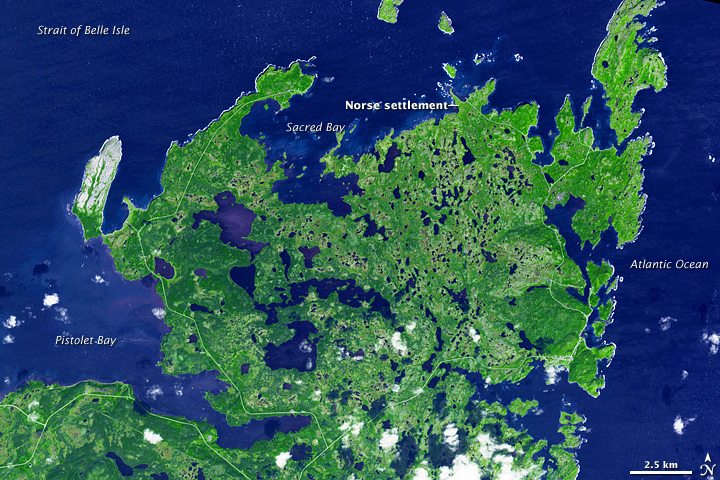 Leif and his crew are known to have landed somewhere on the eastern coastline of modern day Canada, namely in Newfoundland island. He then gave it the name ‘Vinland’ (the land of wine). However, not much is known regarding the fate of the Norse settlers Leif had brought with him.

In spite of the fact that at first all seemed to unfold quite peacefully for the recently settled Scandinavian community, they shortly came in contact with an indigenous group of Native Americans who have been henceforth known as ‘Skrælings’ (the term can possibly denote ‘savage’ or ‘cloth-skin’ in Old Norse).

The Norse numbered few settlers to actually win a subsequent war with the indigenous population and they were inevitably forced to withdraw from Vinland. As such, very much unlike the Faroe Islands, Iceland, or Greenland (territories that have been previously settled by the Norsemen), modern day Newfoundland preserves only sparse archaeological evidences of a past Norse presence.

The first day of the Summer at L’Anse aux Meadows in Newfoundland, Canada, as photographed in June 2002. Image source: Wikimedia Commons

The archaeological site of L’Anse aux Meadows in Newfoundland and Labrador province, Canada, comprises a recreation of some Viking Age longhouses, being the most renowned and best preserved Norse historical site in North America. The site was discovered during the early 1960s by Dr. Helge Ingstad and his wife Anne Stine Ingstad. Subsequently, in 1978 the area was included on the list of UNESCO World Heritage Sites.

In mid 2015, a team of archaeologists led by Sarah Parcak spotted another possible Viking Age site in southern Newfoundland, namely at Point Rosee. If confirmed, this discovery may very well re-write the history of the Norse settlement in the region.

These two were sighted by Leif Ericson prior to Vinland and were also named by him after he set ashore. While Helluland did not present much interest to Leif given its barren landscape, Markland was quite promising. It’s probable that the latter eventually represented an important timber source for the settlement(s) in Newfoundland island.

Below you can watch two footage videos highlighting the history of the Norse presence in Newfoundland at L’Anse aux Meadows, Canada:

The following presentation video in particular focuses on a reconstructed Norse settlement at L’Anse aux Meadows: As previously mentioned, the voyages of both Erik the Red and Leif Erikson are documented in two Icelandic sagas, namely that of Erik the Red and of the Greenlanders. Both medieval manuscripts translated in English can be found and read online below: