‘Every man’s memory is his private literature.’ – Aldous Huxley

The Beginnings Of My Personal Literature: The Prose

First of all, I’d like to thank you for your the time spent on my website as your readership means quite a lot to me. If you happen to be more interested in my other literary endeavours, here’s where you can purchase my first non-fiction book on the Norsemen and the Viking Age entitled ‘The Viking Realms: A Fascinating and Adventurous Introduction into the Viking Age’, in both digital and paperback format, online, via Amazon.com. 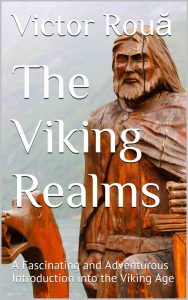 ‘The Viking Realms – A Fascinating and Adventurous Introduction into the Viking Age’ (First edition – independently published in December 2016 on Amazon.com)

The novel represents a straightforward, well-defined, and myth-busting overview on the Viking Age and the Norsemen, focusing on their major achievements throughout the renowned Viking era during the early Middle Ages. The book encompasses content available both on the website as well as additional material covered in separate chapters.

With respect to its main points of interest, the novel revolves around the topics of navigation, exploration, settlement, society, traditions, music, folklore, mythology, and even cuisine which defined Scandinavia during the heyday of the Viking expansion in Europe and overseas (more specifically towards the Faroe Islands, Iceland, Greenland, and, ultimately, North America in contemporary Canada).

The aforementioned aspects are carefully analysed within an objective manner, with hundreds of references supporting the validity of my written material, without clinging to the many Romanticised misconceptions that have long altered the true history of the Norsemen.

The first edition of the book was published on Amazon Kindle in December 2016. If you are interested, you can purchase the book via Amazon.com here.

Please note that in the case of the Kindle edition VAT is equally included.

Additionally, you can also check the reviews on the Goodreads profile of the book. Last but not least, thank you very much for your support!

Update note: As of mid 2018, I eventually decided to further expand and issue a second edition of the hereby non-fiction novel as part of my personal literature. The second edition of the book will contain bonus material, stemming mostly from previously written articles that have been published on the website since the volume was firstly released on Amazon back in December 2016.

Since my high school years onwards, I have also been keen on composing poetry, mainly to serve the lyrical purposes of a series of future songs that I would have liked to perform with an electric band of my own back in the day (rooted mostly in the genres of blues, jazz-rock fusion, and progressive rock).

The first edition of ‘Lines of an Abstract World’, my first poetry volume, independently published on Amazon.com in November, 2018.

In late 2018, approximately two years after high school graduation, I took the decision to digitally publish my first volume of poetry (which, in a certain manner, can be also perceived as a personal songbook of mine) under the title ‘Lines of an Abstract World’.

The first edition of the volume enclosed a number of 44 poems, most of them written in English (with a fair few in French as well). ‘Lines of an Abstract World’ was independently published on Amazon.com on 5 November 2018 in both digital and paperback format.

Nonetheless, due to a series of personal decisions, I have shortly unpublished the work from Amazon for further individual assessment and expansion. In the meantime, the volume has been enriched with lyrics for other songs, mainly in English.