A Brief History Of Bukovina, Romania During The Middle Ages

Bukovina is a historical region situated at the crossroads of Central and Eastern Europe, nowadays divided between present-day Suceava County in northeastern Romania and Chernivtsi Oblast in western Ukraine.

Throughout the passing of time, the land that would later came to be known as ‘Bukovina’ had been longtime part of the highlands of the medieval Principality of Moldavia, up until the point the Habsburg Empire decided to annex the region during the late 18th century, ascribing its name in the process. Consequently, the name ‘Bukovina’ actually stems from the Slavic term ‘buk’ (i.e. ‘beech tree’, also cognate with the German ‘buche’, a word that has the same meaning). 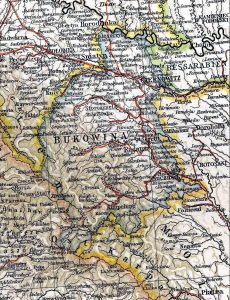 During the High Middle Ages, the territory of what was eventually known as Bukovina represented the core of the Principality of Moldavia, one of the two Romanian principalities that was founded as independent states in the 14th century (along with neighbouring Wallachia, located to the south).

Out of a total of four capitals that the Principality of Moldavia has had along its entire history, three of them can still be found within the boundaries of contemporary Suceava County, namely Baia (German: Moldenmarkt), Siret (German: Sereth), and Suceava (German: Suczawa/Sutschawa).

The first historical capital of Moldavia, the mid 14th century-attested Baia, although strategically placed on a commercial route linking Eastern Europe with the Kingdom of Hungary and the Kingdom of Poland, fulfilled the task of being the seat of Moldavian princes only for a brief period of time (roughly a couple of decades). Afterwards, the royal court was moved to Siret, the second capital.

On another note, what is even more puzzling about Baia is the fact that this settlement has even been inhabited by a significant number of German merchants and potters, who, at first solely interested in trade, subsequently decided to settle down. The German-speaking merchants in question stemmed from neighbouring Transylvania (German: Siebenbürgen; i.e. ‘the land of the seven castles’) where they were known as Saxons (Germans: Siebenbürger Sachsen).

Over the course of several generations, the Saxon community of settlers in Baia grew more and more in numbers. This also led to an increase in their trade but, at the same time, boosted their administrative and religious influence, which made it possible for them to be briefly in charge of the town under the title of Schultheiß (Romanian: Șoltuz), the equivalent of a medieval mayor. Furthermore, the local Saxons also managed to construct their own Roman Catholic cathedral. Its ruins can still be visited today in the small commune of Baia in Suceava County.

Siret had a short-lived era as the capital of the Principality of Moldavia, just as its predecessor, Baia. However, as opposed to Baia (which was mainly a commercial town), Siret used to be a noteworthy strategic location for the Teutonic Knights, who, in the early 13th century, had even built a fortress on a hilltop in its proximity. Nonetheless, both the town of Siret and the Teutonic stronghold were plundered and destroyed on the verge of the Tatar invasion of Eastern Europe (which took place during the mid 13th century).

As Siret was no longer a viable option for being the seat of the Moldavian rulers, the capital had to be moved to the city of Suceava. Out of all the three medieval capitals of Moldavia, Suceava fulfilled this task the most, being the administrative, cultural, and military centre of the principality for nearly two centuries (a period of time spanning between the late 14th century until the late 16th century).

Suceava can still be noted today for its well-preserved medieval fortress as well as for two other ruined fortifications: the princely court (situated in the city’s old town) as well as another one located on a hilltop near the commune of Șcheia (German: Skeja). Aside from the aforementioned strongholds, the Princely Inn is another medieval building of the city which can still be visited by tourists.

Other important medieval landmarks of Bukovina include a series of fortified churches which have also been designated UNESCO World Heritage Sites during the early 1990s.