The Goths: The History Of A Forgotten Ancient People Of The North

The Goths were an ancient Germanic-speaking population of Northern Europe who considerably contributed (alongside other Germanic and Slavic peoples of the Migration period) to the fall of the Western Roman Empire in the 5th century AD. Their geographic origins are rather debated by many contemporary historians. Although it is clear that they spoke the Gothic language (which used a script akin to the Old Norse futhark), their precise place of origin remains quite controversial to these days.

A comprehensive late Latin manuscript known as ‘De origine actibusque Getarum’ (literally, ‘The origins of the Goths’) written by the Roman author Cassiodorus was supposedly a significant work detailing the history of the Goths and their origin. The chronicle in its original forms was, nevertheless, lost in time.

Yet, another Roman author by the name Jordanes (who, as paradoxically as it might seem to some, a Goth in origin) used a certain extent of Cassiodorus’ work in order to elaborate a separate chronicle entitled ‘Getica’. To this date, it remains the most earliest document on the ancient history of the Goths. Nonetheless, it is somewhat flawed as it mistakes the Getae/Dacians for the Goths (as an argument, it is mentioned that Zalmoxis, an acient Getian divinity, becomes king of the Goths at some point after their migration).

In the beginning of ‘Getica’, Jordanes states that the Goths stemmed from a faraway land referred to as ‘Scandza’ (which definitely means Scandinavia). From there, under the leadership of a legendary ruler by the name Berig, they embarked on three ships in order to emigrate from their ancestral land. According to the same Jordanes, the Goths subsequently travelled southward in Europe and are credited with sacking Troy, after the Trojans allegedly recovered from the 10 year siege led by the Greeks during the Trojan War.

Contemporary historians agree that most of the writing of either Jordanes or Cassiodorus in ‘Getica’ is erroneous and utterly fictional given the fact that most of the deeds of the Goths are wrongly attributed to the Dacians or the Getae. Furthermore, even the brief passages of historical accuracy seem to be mixed with a tremendous amount of fiction and fantasy.

Beyond this early work, however, extensive historical and archaeological research seemed to have shed some light on the actual place of origin of the Goths. So it that important parts of the land of Götaland (literally meaning ‘land of the Geats‘) as well as the isle of Gotland in the Baltic Sea, both pertaining to the Kingdom of Sweden, could have constituted the ancient homeland of the Goths.

The borders of Gothia (or southern Sweden) marked in yellow, as depicted on a 17th century map. To the south, marked in red, is the Kingdom of Denmark, whereas to the west, marked in green, is Norway. Image source: Wikimedia Commons

Gotland, Sweden’s largest island, is very likely to have been the main homeland of the Goths. In this respect, because of overpopulation, it is believed that the ancestors of the Gutes (the indigenous population of Gotland) were forced to migrate to southern Europe at some point during the tumultuous Migration Age which eventually saw the decline of the Western Roman Empire.

It must be equally mentioned that on the isle of Gotland noteworthy archaeological artefacts were discovered, some of them dating to the Iron Age, the epoch during which the Goths most likely thrived in southern present day Sweden.

Several similarities between the work of Jordanes/Cassiodorus exist in a Norse saga known as ‘Gutasaga’, as it narrates the earliest known history of Gotland in the Old Gutnish dialect of the Old Norse language. Fiction is common throughout its first passages (as the island is believed to be under a spell which hides it under water during daylight, making it visible solely during nighttime), but afterward posits a similar theory concerning the migration of the Goths to southern Europe.

According to the ‘Gutasaga’, it is quite likely that the Goths navigated on the rivers Vistula, Dniester and Dnepr to the Black Sea where they encountered Greek merchants, ensuring economic links which will be later know to the Norsemen throughout the Viking Age as well.

After the fall of the Western Roman Empire, modern day Götaland was fragmented into many petty kingdoms, but the population inhabiting them was unanimously referred to as ‘Gautar’ in Old Norse. They were a common people who spoke the Old Gutnish dialect of Old Norse. Bearing in mind the aforementioned denominations (‘Gautar’, ‘Geats’, and ‘Gutes’) it is easy to discern a certain link between them and the Goths. Several theories even posit that they are names for the very same people.

Whatever the precise ethno-linguistic affiliation between them might be, with certainty the migratory Goths who pushed backward the frontiers of the Western Roman Empire developed a separate culture from that of the related North Germanic peoples of Scandinavia.

The Goths In Southern Europe And Their Legacy

After the presumed overpopulation in native Gotland, the Goths migrated southward to continental Europe. First to present day Poland and across the Baltic coastline to contemporary Lithuania, Latvia, and Estonia, then, gradually, to Central and Southern Europe.

Their migration caused havoc and mayhem inside some of the provinces of the Roman Empire, which eventually boosted the downfall of the Western Roman Empire, putting an end as such to the late Antiquity and paving the road for the emergence of the early Middle Ages.

Throughout their campaigns of territorial expansions, the Goths were not as united as some people expect. On the contrary, after they left Gotland, they disunited with the Rugii, Vandals, Gepids, and Burgundians. All these tribes, however, preserved many similitudes in origin (including the language).

These two branches separated from each other and seized control of some decadent and military-damaged Roman provinces, including most notably Dacia. It was actually because of the incursions of the Goths that the Roman province of Dacia was abandoned by the Roman legions in the 3rd century AD.

The territory of present-day Romania (along with some parts of neighbouring countries) were part of a large Gothic kingdom which comprised land from Danube to Dniester, and even beyond. Under the leadership of King Alaric I, the Visigoths sieged and conquered Rome in 410. On the other hand, the Ostrogoths led by Theodoric the Great managed to seize control of much Southwestern Europe, including most notably much of the Iberian peninsula in the 6th century.

In the end, the Byzantines re-conquered the Apennine peninsula from the Goths after Theodoric’s death, and the remaining Goths were assimilated by the Lombards, another Germanic people. As a matter of fact, both the Goths and their language faded away as of the cause of other migratory peoples during the early Middle Ages. The only true Goths to have survived after the Middle Ages were the Crimean Goths, who spoke the Crimean Gothic dialect and are documented to inhabit Crimea in the 18th century.

The Visigoths migrated from present day Ukraine, Romania, and the Republic of Moldova to Gaul and then Southwestern Europe in the wake of the invasions of the Huns. Under Alaric II, the Visigoths were devastated at the Battle of Vouillé (507) near Poitiers, ultimately finding refuge southward to Iberia.

So it is that after settling Aquitaine and making contemporary Toulouse their capital city, the Visigoths managed to consolidate the Visigothic Kingdom in southern modern day France and much of the Iberian peninsula. This kingdom lasted from the 5th century to the 8th century, surpassing as such, in time, its Ostrogothic counterpart.

Detailed map of Southwestern Europe during the Migration period, highlighting the location of the first Visigothic settlement in Aquitaine. Image source: Wikimedia Commons

The Goths also managed to preserve Roman culture throughout the Migration period. As ironically as it might seem at first glance, these Germanic populations who pushed the boundaries of the Western Roman Empire closer to Rome did not inflict any changes or notable influences on the Romance languages and even showed admiration and respect to Roman architecture and Latin literature.

One of the largest Gothic treasures ever unearthed, the 4th century Pietroasele Treasure discovered in Pietroasele, Buzău county, Romania in the 19th century preserves the reputed Ring of Pietroassa which bears an inscription in the Gohic language under the form of the elder futhark alphabet. 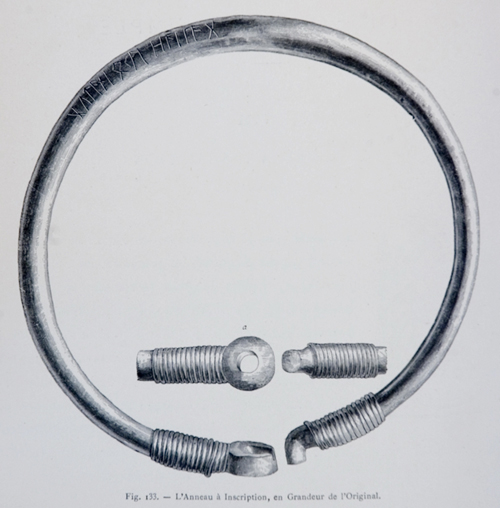 Below you can watch two brief videos on Youtube on the ancient history of the Goths:

1 Response to The Goths: The History Of A Forgotten Ancient People Of The North