Norwegian Forest Cats, The Pets Of The Vikings

The Norwegian forest cats are a very popular breed of cats in the Nordic countries. They are one of the most popular pet choices in Norway, Iceland, Sweden and also France. It is believed that these pets were brought by the Vikings to Norway from the British archipelago during the early Middle Ages. Ever since, they gradually became accustomed to the Scandinavian cold climate. This is why their fur had grown rather long compared to that of other breeds of cats. 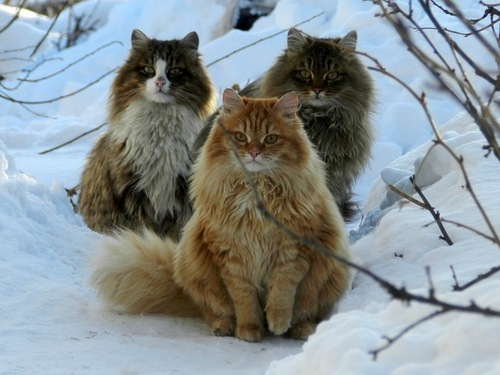 The Norwegian forest cats may also be a mixture of cats brought by the Vikings from the British Isles during the Viking Age and various longhaired cats brought by the Crusaders to Norway. These longhaired cats were likely of the Turkish Angora breed. The Norwegian forest cats are also strikingly similar to their Siberian counterparts.

In Norwegian, they are referred to as ‘Norsk skogkatt’ (singular form). Several Norse legends recount their ancestors as mountain-dwelling fairy cats with an incredible climbing skill. Furthermore, it is believed that their ancestors served on the Norse longships as mousers during the Viking raids. Aside from being used on sea, these pets were tremendously prized in medieval Norway for their hunting aptitudes as well as their innate talent in regards to climbing, being almost indispensable on farms.

Nevertheless, the breed nearly became extinct in the mid 20th century, but thanks to the noteworthy efforts made by the Norwegian Forest Cat Club they were saved through a special breeding program. The Norwegian forest cats have also been registered at the European Fédération Internationale Féline as early as the 1970s by a cat enthusiast by the name Carl-Fredrik Nordane. They were subsequently named Norway’s national cat.

You can watch the following video briefly depicting the breed’s history:

Below you can watch a short video of a Norwegian forest cat female playing in the snow in Sweden: You can take a look at the following Animal Planet presentation as well: The Norwegian forest cats are known for being very affective and loyal to their owners, but unfortunately many health problems were reported, especially kidney and heart diseases.

31 Responses to Norwegian Forest Cats, The Pets Of The Vikings