The Origins Of The Norse-Gaels In Ireland And Scotland

The Norse-Gaels (alternatively known under the terms ‘Hiberno-Norse’ or ‘foreign Gaels’) were a people who originated in the Norse settlements established during the Viking Age in Ireland, Scotland, Isle of Man, and the Hebrides who resulted from the intermarriage between the Norse colonists and the native Gaelic populations.

In early medieval Ireland, the Norse-Gaels primarily descended from the regions settled mostly by the Norwegian Vikings between the 8th and 10th centuries. The first recorded Viking raid in the Irish Sea took place in 795 on Lombay Island.

The Norse-Gaels gradually became the dominant force on the territories around the Irish Sea between the Early Middle Ages and the High Middle Ages, founding powerful and lasting kingdoms in the process, most notably those of Dublin, Mann and the Isles (i.e. the Isle of Man and the adjacent islands), and Galloway in south-west Scotland. 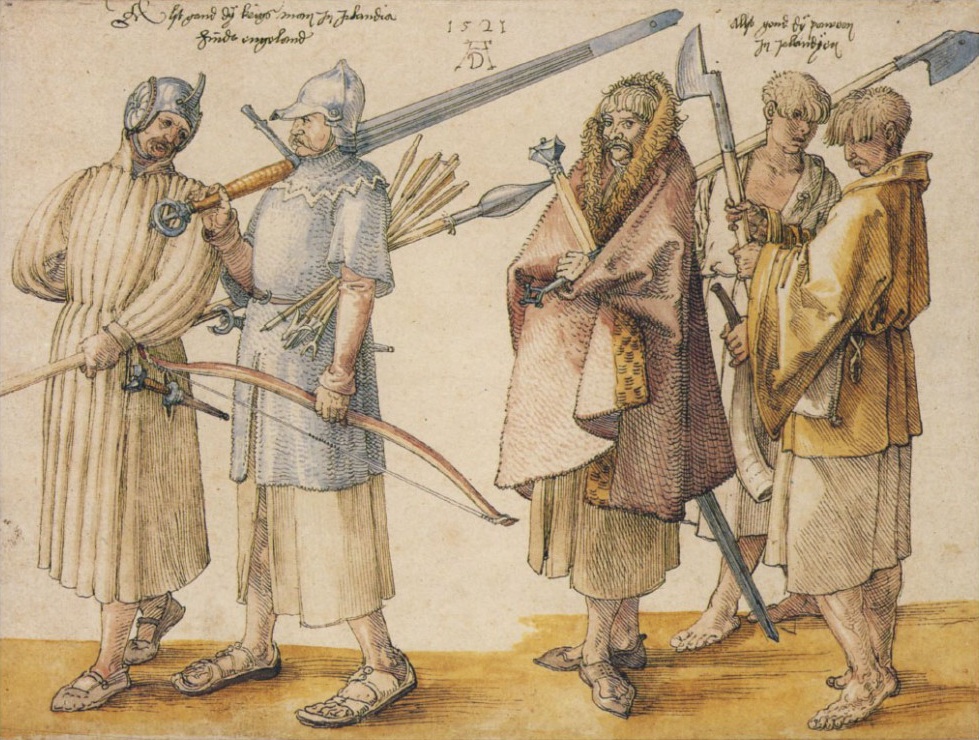 16th century artistic depiction of a group of Irish and Scottish warriors (Gallowglasses and Kerns) by Albrecht Dürer. The Gallowglass, an elite mercenary warrior in medieval Ireland, was a member of the Norse-Gaelic clans of Scotland during High Middle Ages. Image source: Wikimedia Commons

Other two noteworthy raids that took place on Irish soil unfolded on the coastlines of the petty kingdoms of Brega (located north of contemporary Dublin) in 798 and of Connacht (one of the four historical provinces of Ireland) in 807. These early Viking raids were based on quick hit-and-run tactics and may have been entirely conducted by Norwegian Vikings. Subsequently, the main regions of Norse settlement were established in Dublin, Wexford, Waterford, Limerick, and Cork. These cities were initially designed and built as coastal defensive strongholds (known as ‘longphorts’) by the Norsemen during the first wave of settlement in the Emerald Isle (which corresponds to the Irish Early Middle Ages).

With respect to Scotland, the earliest Norse incursions can be chronologically traced back to the early 8th century. As in the case of Ireland, the vast majority of Vikings who raided and then settled were Norwegian in origin. In the wake of the first Norse-Gaelic contacts, the archipelagos of Shetland and Orkney were named ‘Norðreyjar’ (i.e. ‘the northern isles’ in Old Norse) while the Hebrides, the islands of the Firth of Clyde and Isle of Man — that formed the basis for the Kingdom of Mann and the Isles — were named ‘Suðreyjar’ (i.e. ‘the southern isles’ in Old Norse).

The Norse-Gaels exerted tremendous influence and power over the Kingdom of the Isles from the 9th century to the 13th century. Furthermore, the greatest legacy of the Norse settlement of Man is that they introduced land divisions as well as the Tynwald parliament, both of which are still in use to this day. The Tynwald, along with its Faroese and Icelandic counterparts, are the eldest functional parliaments to contemporary times.

As in the other places where they settled down, the Norsemen assimilated step by step in the local Gaelic communities, speaking the Gaelic language and practicing the Gaelic customs as part of their integration process. In addition, they did also provide a cultural syncretism by merging the Scandinavian and Gaelic cultures, thus creating a strong historical legacy and cultural heritage for their descendants.

The Norse-Gaels called themselves ‘Ostmen’, literally meaning ‘men of the east’, as opposed to ‘Vestmenn’, meaning the Gaels or literally ‘men of the west’. Their name is still preserved in some localities in Iceland and the Faroes, namely Vestmannaeyjar (i.e. ‘Westmen Islands’) and Vestmanna (i.e. ‘Westman’s Harbour’).