The Spectacular Icelandic Landscapes Of Vatnajökull And Jökulsárlón

The small Nordic nation of Iceland is doubtlessly full of spectacular landscapes and natural wonders worth visiting. In this respect, the Vatnajökull National Park (one of the three national parks in Iceland) offers a variety of astonishing sceneries which feature the crystal clear beauty of meadows, rivers, and ice alongside the hectic and powerful volcanic/geothermal activity.

In Icelandic, Vatnajökull roughly translates as ‘Water Glacier’ and is the country’s biggest ice cap as well as the second greatest of its kind in Europe, being only surpassed by Austfonna which is situated in Nordaustlandet, the second largest island of the Svalbard archipelago. The Vatna Glacier is located in southeastern Iceland and covers more than 8% of the the island’s total area.

Satellite view of Iceland (early September, 2002). Vatnajökull can be seen in the southeastern part of the island and is notable for being the country’s largest ice cap. Image source: Wikimedia Commons

Jökulsárlón (which literally translates as ‘glacial river lagoon’) is one of Iceland’s largest glacial lakes, being also situated in the southeastern part of the country. Its primary outflow is represented by the Atlantic Ocean. It is noteworthy to mention the fact that while popular culture is concerned, Jökulsárlón was partly used for filming ‘Batman Begins’ (2005) or ‘Beowulf & Grendel’ (2005).

Below you can browse the photo gallery in order to see some of the most marvelous landscapes from the Vatnajökull National Park in southeastern Iceland. 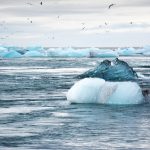